Home » Ask The Expert » What is the relationship between process stability and process capability? 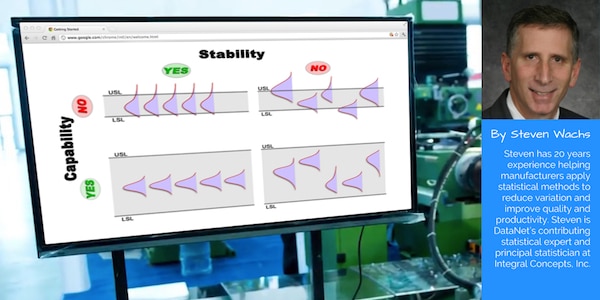 Nothing and everything. Though they are not directly linked, statistician and SPC expert Steven Wachs cautions that without evidence of process stability, capability data is useless.

Process Stability refers to the consistency of the process with respect to important process characteristics such as the average value of a key dimension or the variation in that key dimension. If the process behaves consistently over time, then we say that the process is stable or in control. The graphic on the left below illustrates a stable process. The process distribution remains consistent over time.

The graphic on the right illustrates an unstable process. The process distribution average is shifting over time.

Process Capability is a measure of the ability of the process to meet specifications. It tells us how good the individual parts are. There are several methods to measure process capability including an estimation of the ppm (defective parts per million). Click here for an article on how to calculate process capability. Capability indices such as Cp, Cpk, Pp, Ppk are very popular; however, trying to summarize the capability via a single index is often misleading because key information about the process is lost. The issues with capability indices will be discussed in a future article.

To make sure we understand the difference between process stability and process capability, consider my wife’s attempts to bake nonfat cookies. For years, she has been experimenting with different recipes with the objective of producing a great tasting non-fat cookie with a reasonable texture. Unfortunately, she has not yet succeeded. While her results have not been capable (they are out of spec), she has been very consistent-consistently bad. Yet, I know what to expect from her nonfat cookies so I can say that the process is at least stable or in control.

Process stability and process capability are different ideas and there is no inherent relationship between them. That is, knowing that the process is capable (or not capable) tells us nothing about the process stability. Furthermore, knowing if the process is stable (or not) tells us nothing about the process capability. The following graphic illustrates all four possible scenarios. The graphic shows the distribution of individual measurements over time (left to right) compared to the upper and lower specification limits.

The One Link Between Stability and Capability