Home » Ask The Expert » What is a Standard Deviation and How Do I Compute It? | Ask the Expert 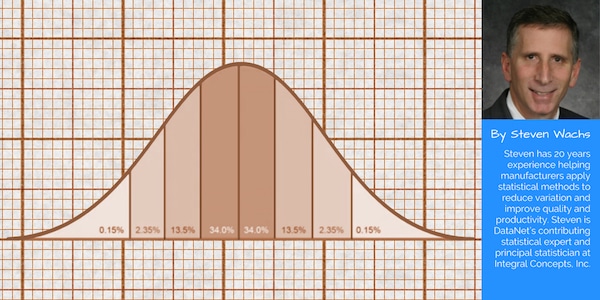 It’s not subjective: Because it’s an objective measure of variation, standard deviation is an essential statistical tool for increasing quality.

While many companies still think of quality as “being in specification,” progressive companies focus on reducing variation to minimize waste and produce products that perform consistently well over time. Quality may be thought of as inversely proportional to variation–that is, as variation increases, product quality decreases.

Since variation and quality go hand-in-hand, we require objective measures of variation. The standard deviation is a statistic that describes the amount of variation in a measured process characteristic. Specifically, it computes how much an individual measurement should be expected to deviate from the mean on average. As shown below, the larger the standard deviation, the more dispersion there is in the process data.

where X i = the i the data value, μ= the true process average, N = the population size

Essentially, the formula tells us to do the following:

Why do we need to square the deviations then take the square root? If we simply computed the average deviation of each value from the mean (the step 2 values)–we would always get a result of zero! (This is because the positive deviations would cancel the negative deviations.) Squaring and “un-squaring” resolves this issue and ensures that our standard deviation will have the same units that our measured values have.

An example:
My daughter’s soccer team has eight girls on the team and their heights in inches are as follows:

The standard deviation of the team’s height (we have access to the entire population here!) is found using the above formula and steps:

Usually, we can only estimate the true standard deviation by using a sample. The formula for a sample standard deviation (S) is slightly different than the formula for s. First of all, since we cannot compute μ
(a true population or process average), we must estimate it using the sample data. This is called the sample average and is usually called x-bar. The other difference is not so obvious. Rather than dividing by the sample size (N), we divide by (n-1). The formula is:

The reason for dividing by n-1 has to do with a concept called “degrees of freedom.” (An intuitive explanation will be given in a future article.)