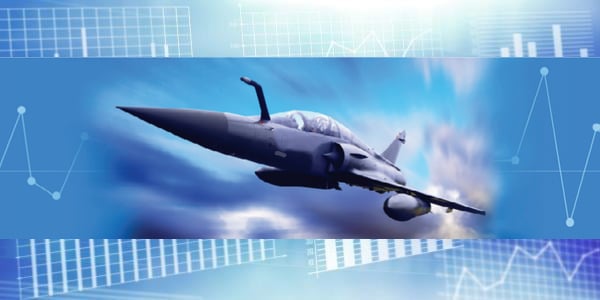 Teledyne Microwave Solutions, a worldwide leader in radar and telecommunication, reported that it used WinSPC to reduce scrap and rework by $250,000/yr. for a single product characteristic.

A world class supplier to the military, Teledyne Microwave Solutions is reducing costly waste during the production of its highly engineered products by detecting adverse process changes the moment they occur.

While 85% of Teledyne’s business is with the military, it also serves industries from aerospace to meteorology to wireless communication. Among the companies that rely on Teledyne to power their products are BAE, Saab Systems, and ATK Space Systems.

Teledyne’s components are highly engineered, intricate assemblies—and they’re quite expensive as a result. Their construction requires a craftsmanship level of expertise from the factory-floor staff that assembles them during the 60-80 day production cycle. During this time, characteristics such as copper plating thickness, perpendicularity, and straightness are inspected on 100% of the parts fashioned.

And once an assembly is complete, it undergoes a month of rigorous electrical performance testing. During this stage, if a product needs to be reworked, or worse, scrapped, substantial loss is realized. This loss is magnified by the product’s price tag and the surgical, deconstructive nature of reworking it.

Furthermore, even the smallest problem during production can mean scrapping an assembly during testing. That’s because the myriad of mechanical characteristics precisely shaved, cut, and molded into the product have a direct impact on crucial electrical performance indicators, which must pass if the product is to leave factory doors.

It comes as no surprise then, that Charles Brown, Teledyne’s resident Six Sigma Master Black Belt, saw an opportunity to inject some lean into the facility’s manufacturing processes.

Charles knew that if problems could be forecasted and addressed before a product made it to the critical performance test phase, costly scrap and rework could be diminished. He also knew that gaining a better understanding of the complex relationships between the assemblies’ mechanical characteristics and its electrical performance indicators would lead to a more reliable product design.

Additionally, given the sheer volume of product data captured, it became increasingly evident that this information needed to be centralized digitally. Too much time was being spent gathering paper check sheets and transferring data into Excel. Extracting a subset of data for analysis or producing statistics requested by a customer was not a simple task, and often required searching through filing cabinets full of check sheets. Production data was used after-the-fact, mainly to validate the product’s critical characteristics, rather than to proactively detect and control process changes in real-time. In short, the data wasn’t immediately accessible and actionable.

The objectives were clear. To lower costs, Teledyne needed a way to:

To accomplish these objectives, Teledyne decided to install statistical process control software on the shop floor.

After comparing several applications, WinSPC was selected because production operators and engineers found its administration, data collection, and analysis capabilities easier to access and use.

Teledyne has greatly expanded and improved its use of statistical process control, and now applies SPC across the factory on live production data using WinSPC software.

WinSPC has facilitated solutions right on the production line, preventing performance failures that would otherwise be detected up to three months later during testing, at a time when fixing failures would be much more expensive. Teledyne now monitors production using a live collection screen and can instantly detect process shifts using SPC tests.  Through this real-time monitoring, and by taking corrective action initiated by triggered alerts, Teledyne has markedly reduced the volume of deconstructive rework it performs­—and more beneficial still— it scraps fewer assemblies.

Said Brown, “Using WinSPC, we can detect flaws long before the product is fully assembled, which prevents scrapping or reworking a very expensive product. Because of this, our quality efforts easily pay for themselves.”

“Using WinSPC, we can detect flaws long before the product is fully assembled, which prevents scrapping or reworking a very expensive product. Because of this, our quality efforts easily pay for themselves.”

Additionally, Teledyne engineers now use WinSPC’s Plant Monitor to view the specific processes they supervise and receive live dashboard-style status updates on those processes all in a single screen. This has greatly simplified the task of managing the plant’s performance and allowed engineers to quickly drill-down to real-time charts and statistics for any characteristic under their supervision.

Beyond detecting process changes at the point of production, Teledyne has also lowered its costs by optimizing both processes and product design through diligent analysis of its production data.

Using WinSPC’s live histograms, distribution analysis, performance statistics, and other analysis tools, Teledyne now has a greater understanding of its processes, equipment, and practices. WinSPC has enabled Teledyne to prioritize improvement initiatives that reduce cost the most, and then clearly measure the success of these efforts. In addition, by evaluating data distributions over time, a characteristic’s target value can by adjusted to reduce the number of non-conforming components manufactured and increase yield.

Streamlined by WinSPC’s ability to quickly filter and share data with external applications, Teledyne has also paired WinSPC with an in-depth regression analysis tool to better understand the complex relationships between its products’ mechanical inputs and electrical performance outputs.

In one case, by applying regression analysis, it was found that one characteristic of a helix-shaped component had a direct impact on a key electrical performance indicator that was drifting out of statistical control, resulting in failures. By adjusting the helix characteristic specified for design, and controlling the characteristic in real-time using WinSPC, the related performance indicator returned to a state of control and the amount of scrap and rework generated dropped dramatically. In a year’s time, Teledyne realized a savings of $250,000.

Finally, Teledyne now spends drastically less time administering its SPC program, analyzing and searching its data, and producing reports. That’s because all of Teledyne’s quality information—from mechanical product inputs to process parameters to electrical performance outputs—is housed in a centralized database rather than a filing cabinet or folder of Excel files. Using WinSPC, the information is now readily at the fingertips of every engineer. By applying a few search criteria, engineers can quickly isolate subsets of data for analysis to drive improvement. And, using WinSPC’s standard reports, they can easily generate validation documentation to satisfy customer and ISO requirements.