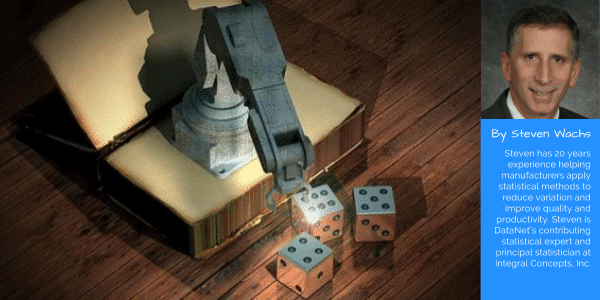 In this case, we address $1.2 million worth of annual process variation.

In the case study presented below, we were brought in to address problems stemming from variation in a process that had been costing the manufacturer $1.2 million annually. Using statistical methods, we were able to identify and resolve the issue in four days.

Variation in manufacturing processes causes significant expense in nearly every industry. Variation during production results in products that are not truly identical and thus do not perform identically in the marketplace. Some units will perform as expected, but others may fail early and incur additional costs. Some may even be unsafe and lead to recalls and litigation. To prevent these outcomes, manufacturers often expend large sums reworking products to address problems arising from process variation.

Almost all of these costs can be eliminated by addressing the root cause; the focus of efforts should be on reducing variation in the process as opposed to reacting to the unfortunate outcomes of variation. As discussed in the case presented below, tools such as statistical experimental design, analysis, and statistical process control, can be used to improve process control and mitigate variation, delivering impressive bottom line savings. Although the case study presented here concerns an automotive component, the methods illustrated may be used to solve problems across a wide variety of industries involving manufacturing and assembly operations.

A transfer case is an automotive component that receives power from a transmission and transfers power to the front and rear axles (see example below). Transfer cases go into 4WD and AWD vehicles.

Transfer cases need to meet many performance requirements. Among them is slip torque. Loosely, the slip torque is the torque at which a friction clutch slips. The slip torque must be within specified limits—and the nominal slip torque for this particular design is 1500 inch pounds.

A problem existed within a manufacturing plant producing large transfer cases. After assembly, the transfer cases were sent to a test stand which would identify whether a transfer case met a variety of performance specifications, including slip torque. Every transfer case was tested, but each day, approximately 10% of the parts would fail to meet the slip torque requirement. The slip torque was allowed to vary between 1000 and 2000 inch pounds, but it was actually varying from 700 to 2800 inch pounds. Clearly, excessive variation in slip torque existed.

Although the non-conforming transfer cases were not “scrapped,” manufacturing personnel had to continue exchanging subcomponents and re-testing the reconfigured case until it passed all the performance requirements. The additional cost to the manufacturer associated with this “rework” was at least $1.2 million annually.

Using quantitative methods, we set out to identify the sources (factors) causing so much variation in slip torque. First, we needed to identify whether the test stands provided reliable torque data, knowing that measurement systems are not always dependable.

Next, a team of plant and engineering personnel identified 7 factors (potential influencers) that might cause excessive variation in slip torque. A specific and inexpensive experiment was designed that would efficiently explore scenarios using the 7 factors. Note that there is an infinite set of combinations of these variables. However, only a small subset of combinations would be tested. Ultimately, the method would produce a mathematical model to precisely predict slip torque. The methodology would also identify how the factors interacted (depended on each other).

The seven factors chosen were:

The experiment involved producing various transfer case and test stand configurations (32 to be exact) to quickly learn how the factors interacted to affect slip torque. From this information, a mathematical model was developed and checked for validity.

As an example of the transfer cases built and tested, 5 of the 32 combinations are shown below—along with the associated slip torque values.

The data was analyzed, significant main effects and interactions were identified, and a mathematical model which predicts slip torque for an infinite set of the factor settings was generated.

Five of the seven factors had significant “main effects.” In order to understand the effects, the graph below has slip torque on the vertical scales, and factors on the horizontal scales. The increases in “taper” and “armflat” cause dramatic decreases in slip torque. Also, note that all the levels for taper and armature flatness produced slip torque values that were within the original specification limits on average, yet variation among them causes enormous variation in slip torque. 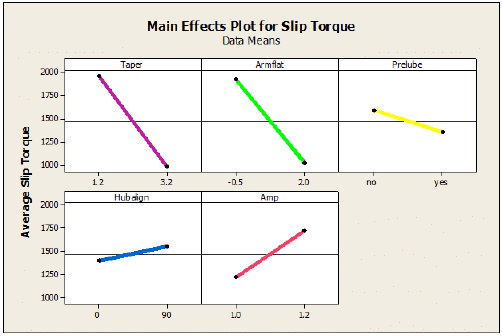 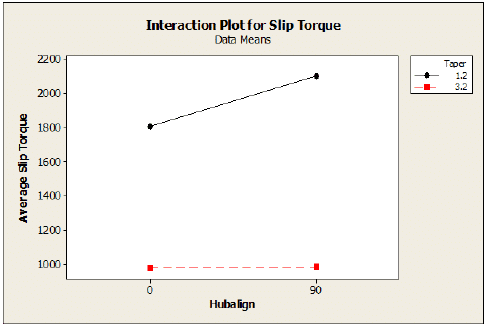 The success of an experiment is measured by the predictive ability of the mathematical model it produces. In this case, the experiment provided a mathematical model that precisely predicted slip torque under an infinite number of conditions. The model also allowed the company to minimize variation in slip torque—so that the transfer cases performed similarly in the marketplace.

From the model, it became evident that current specifications on taper of the coil housing and armature flatness were too wide, and some combinations would naturally cause the slip torque to exceed its specification limits.

From the model, predictive graphics like the “contour plot” below can be generated. The different colors on the graph represent the predicted slip torque for the specified values of the factors. Specifically, the plot shows how combinations of armature flatness and taper affect slip torque when the remaining factors (prelube, inputrpm, hubalign and amps) are held fixed. The changes in armature flatness and taper alone cause slip torque to vary from about 800 inch pounds (upper right of graph) to roughly 2800 inch pounds (lower left of graph).

This illustrates that the specification limits currently set for armature flatness and taper are too wide—causing many transfer cases to exceed the acceptable slip torque limits of 1000 to 2000 inch pounds.

Graphical methods such as the contour plot above may be easily used to determine solutions to the problem. That is, finding ranges of factor values that will consistently result in the slip torque meeting specification.

Once engineering and manufacturing personnel understand which factors affect performance most significantly, those factors must be controlled. The most effective way of ensuring predictable outcomes is to apply SPC to the most critical predictors (or key characteristic) of performance. Effective control charts will quickly identify any significant change to a critical predictor (like armature flatness). Personnel can then quickly identify root causes, determine whether the change was beneficial or not, and make appropriate adjustments (if any) to ensure consistent performance.

An illustrative pair of control charts for Armature Flatness is shown below. 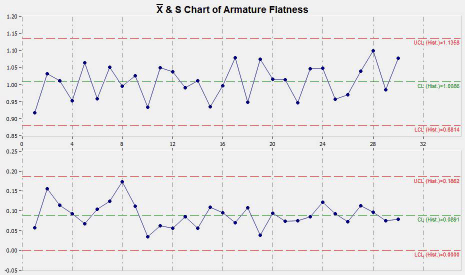 The design, performance, and analysis of the problem took a total of 4 days—and there was no interruption to normal production. We followed up with a control strategy to ensure the slip torque problem would not recur.

The estimated annual savings exceeded $1,200,000, realized from scrap reduction, the reduction of labor involved in reconfiguring components and the elimination of re-testing. Furthermore, customer satisfaction was improved due to more consistent product performance. To date, the problem has not recurred.

The techniques illustrated here may be effectively applied to many typical problems in both engineering and manufacturing. Ideally, engineers and manufacturing personnel would be using such physical-based mathematical models to precisely predict performance. Once key characteristics and their required specifications are determined, they may be controlled using effective SPC methods.