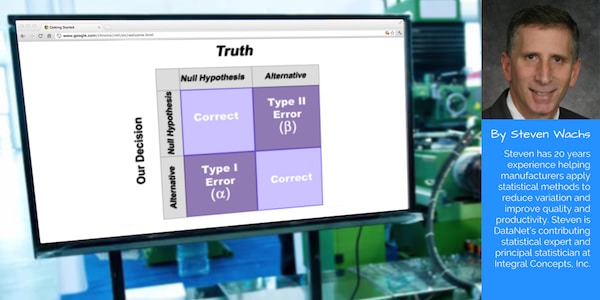 This article will review statistical hypothesis testing in general and then introduce equivalence testing and its application.

What is equivalence testing and when should we use it?

Every day we are faced with uncertainties when making decisions. For example:

Because we ordinarily cannot know future outcomes in advance, we typically weigh the probabilities and benefits of making a correct decision and the potential adverse outcomes if we are wrong. When data is available, it becomes easier to make good, objective decisions while minimizing the risks of making an incorrect decision.

Formal statistical hypothesis testing involves the establishment of a statement called the null hypothesis. The null hypothesis represents the status quo and is assumed to be true unless countered by the data. The alternate hypothesis is typically the opposite conclusion and is usually what the experimenter is trying to claim (if the data supports it). So the result of a hypothesis test is either:

Note that in the second potential outcome, we do not conclude that the null hypothesis is true just because we fail to reject it.

Of course errors are possible in any decision and properly designed hypothesis tests will minimize both types of errors that may occur. The potential errors are classified as follows: 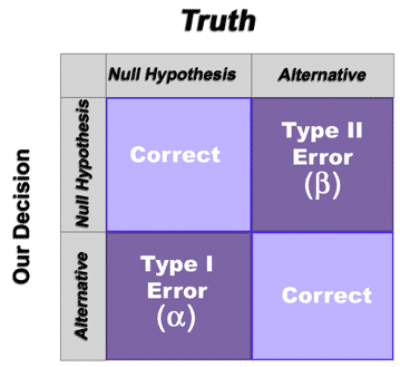 In our analogy, a Type I error occurs when an innocent person is found guilty and a Type II error occurs when a guilty person is not convicted. Naturally, attempts to minimize one type of error will lead to more errors of the other type (all other things being held equal). So attempts are made to judge the severity of each error in a given situation to appropriately balance the risks.

It is often necessary to compare 2 or more groups of data to determine whether they are statistically and practically the same or different. Some examples include:

When comparing the averages of two independent groups of data, most quality professionals or six sigma personnel will utilize a 2-sample t test. The hypotheses for the 2-sample t test are as follows:

The mathematical details of the 2-sample t test are not covered here. However a key point is that the ability to detect differences in averages depends on both the difference between the sample averages and the variation within each group. Statistical software will provide a p-value which allows us to determine whether or not we have sufficient evidence to reject the null hypothesis. In short, if the p-value is less than the significance level (α), then we reject the null hypothesis with (1-α)% confidence. For example if α is 0.05, then we reject the null hypothesis if the p-values is less than 0.05 (at a confidence level of at least 95%). As we saw earlier, α is also the probability that a Type I error is made.

We can only state that there is insufficient evidence to conclude that a difference exists. Hopefully at this point, it is clear why a 2-sample t test is not the best choice if we are actually trying to demonstrate equivalence between two groups. Only if we are trying to demonstrate a difference between the two groups (e.g. one drug produces a superior response to another), does the 2-sample t test foot the bill.

The hypothesis test for equivalence can be written as follows:

To test for equivalence, two separate hypothesis tests are actually conducted (where the difference refers to the difference between the two group means).

So the hypothesis test for equivalence is:

As indicated earlier, two separate hypothesis tests are performed and these will be illustrated in the software output that follows. The following two curves illustrate the two processes.

Equal variances were not assumed for the analysis.

Since only one of the hypothesis tests is rejected (p < 0.05), we cannot conclude that the groups are equivalent. The result is also illustrated graphically below. Because the 95% confidence interval around the estimated difference in the group means extends beyond the upper equivalence limit, equivalence is not demonstrated. 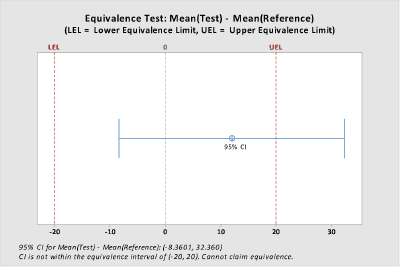 Keep in mind that variability is an extremely important consideration in how products perform, so simply comparing means to determine equivalence is only part of the picture.

If the equivalence test has insufficient power, we may mistakenly conclude that the means are not equivalent when they actually are. Choosing a sample size to ensure adequate power will be addressed in a future article.

When the objective of a statistical hypothesis test is to conclude that groups are equivalent, an equivalence test should be utilized. An equivalence test forces us to identify from a practical perspective how big of a difference is important and puts the burden on the data to reach a conclusion of equivalence.